You are here: Home1 / Overview Effect

The kick-off ‘COGITO in Space’ on November 5, 2018, marked the first public performance of the interdisciplinary ‘COGITO in Space’ project in ASTRON and at the Dwingeloo Radio Telescope. Speakers at the symposium in ASTRON’s Van de Hulst Auditorium were Frank White (The Overview Effect), Fred Spier (Big History and the Future of Humanity) and Nicole Stott (interview with the retired NASA astronaut). The symposium was moderated by Josephine Bosma. The symposium was continued in the radio telescope by sending brain activity from a visitor into the cosmos. In ASTRON’s Minaert Room Daniela interviewed Frank White and Fred Spier.

The interview, the symposium and the radio telescope-part of the COGITO project were filmed by Sandro Bocci. Special thanks to ASTRON (www.astron.nl) and CAMRAS. ‘COGITO in Space’ is a project by media artist and artist in residence at the Dwingeloo Radio telescope Daniela de Paulis (www.cogitoinspace.org).

In the fold menus below, you can choose a video of the COGITO in Space project. Once a fold menu topic is opened you can click on the picture to open the film registration of that topic. Speakers: Frank White (The Overview Effect) and Fred Spier (Big History and the Future of Humanity). The ‘COGITO in Space’ project is staged at the Dwingeloo Radio Telescope in The Netherlands. A visitor in the cabin of the radio telescope sends her or his brain activity into the cosmos while viewing an immersive video of an experimental interpretation of the Earth as seen from Space. The visitor is fitted with a sophisticated encephalogram (EEG) system and a virtual reality headset; the preparation is carried by three neuroscientists Guillaume Dumas, Robert Oostenveld and Stephen Whitmarshand and takes approximately fifteen minutes. Once the preparation is completed, in real time the brain activity is converted into sound and transmitted into space by the artist Daniela De Paulis, using the antenna of the Dwingeloo Radio Telescope pointing in standstill. The brain activity is thus transmitted across a large portion of the sky, without a specific target, highlighting the Earth’s rotation and our place in the cosmos while the experience takes place. Before entering the cabin and transmitting their brain waves into space, visitors are guided by a planetary scientist to explore the area surrounding the scientific facilities. The naturalistic visit is based on principles of Big History and aims at inspiring in the visitors a stronger sense of connection with the Earth’s habitat, before symbolically leaving the planet. On Monday November 5, the latest art project of Daniela De Paulis (artist in residence at the Dwingeloo Radio Telescope) ‘COGITO in Space’ was launched in the Van der Hulst auditorium of ASTRON and the Dwingeloo Radio Telescope. There were about fifty guests, consisting of interested parties, acquaintances, artists and funding bodies. With the project COGITO ‘in space’, thoughts are spread in space like radio waves.

COGITO is an interdisciplinary, collaborative project and the result of several years of research at the Dwingeloo Radio Telescope and ASTRON. COGITO is a conceptually complex art project inspired by the Overview Effect. The main idea behind COGITO is to create a connection between the observer’s mind and his or her idea of the universe, while watching a fascinating video of the Earth as seen from space.

With a warm welcome, Frans de Jong (CAMRAS chairman) opened the morning program in the auditorium: a mini-conference with The Overview Effect as the main theme. The Overview Effect concerns the shift in self-awareness that astronauts experience as a result of seeing the Earth from space. Josephine Bosma (art critic) moderated the four parts of the program.

1. The mini-conference started with a strong opening and an inspiring lecture by Frank White (sociologist and political scientist), author of the book The Overview Effect: Space Exploration and Human Evolution. Frank considers himself a space philosopher. He highlighted various angles with keen headscratchers like: ‘Are we going to space or are we already there and just going a little bit further? What do we get out of space and what do we leave behind? Are we leaving the Earth in the distant future or are we just looking for expansion?’

2. Fred Spier (cultural anthropologist and social historian), author of the book Big History and the future of Humanity, addressed in his lecture his personal experiences during the flight of Apollo 8. ‘During that mission, the famous photo ‘Earth rise’ was taken, which shows planet Earth from above the lunar surface. This evoked a great deal of sentiment from the audience in the United States, with a strong awareness that we are looking at ourselves. In Europe, it was hardly mentioned in the news and the publication was dismissed as a nice picture. How did this difference arise?’

3. Then, Nicole Stott (aquanaut, astronaut and aquarellist in space) took the stage, speaking through a Skype-connection. Now retired, she has actually experienced the overview effect with an impact that she still carries with her. What follows is an interesting interview between her, Josephine and Daniela. 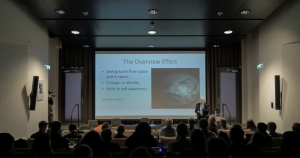 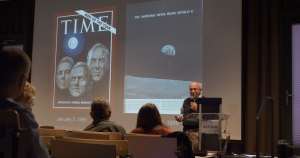 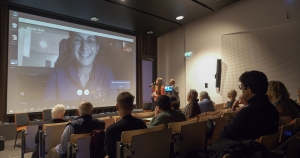 4. The mini-conference was concluded with a forum consisting of Daniela and the three neuroscientists Guillaume Dumas, Robert Oostenveld and Stephen Whitmarsh, who are involved in the development of COGITO.

The many questions and answers were informally continued in animated conversations during the lunch.

For the afternoon program, the guests were split into two groups.

a. In the auditorium one group participated in a lecture by Frans about the history and restoration of the Dwingeloo Radio Telescope and the current use by the CAMRAS foundation. Images and sound of the brain waves transmitted from the radio telescope were also streamed to the auditorium. 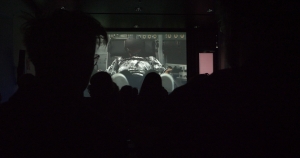 b. The group of guests with the parallel program first walked across the heath of the Dwingelderveld under the guidance of Maarten Roos (planetary scientist and filmmaker), while he told a story based on the book by Fred Spier. ‘For the walkers, the free field of view over the heathland symbolizes the emptiness in space and the 25-meter dish represents the Earth.’

After they arrived at the telescope, Roy Smits (astronomer and CAMRAS volunteer) told them about the origin of radio astronomy and the Dwingeloo Telescope. Afterwards, the guests climbed the metal stairs to the observation room and the big moment was finally there. 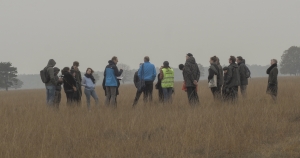 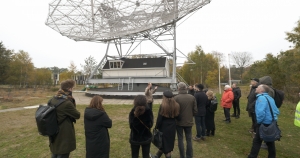 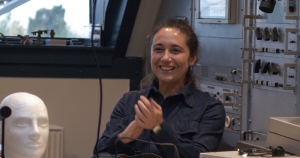 Daniela, the three neuroscientists and the telescope operators Jan van Muijlwijk and Michael Sanders (both CAMRAS volunteers) welcomed them wholeheartedly.

‘The cabin, converted into the art project ‘COGITO in Space’, is full of computers, a beamer and transmitting equipment. The remaining space is filled with stairs arranged around the ‘zero gravity chair’, which seems to give you weightlessness. A participant is already ready on this deckchair. She wears an EEG cap that measures her brain waves. Through a virtual reality headset, she gets to see a special film that can induce the overview effect. The space is darkened and the brain activity from the participant, while she is watching the movie in the gravity chair, is recorded and sent into space by Daniela, also a licensed radio amateur.’

‘Guillaume projects a mix of the live EEG-signals (the first two channels) on the Stellarium-view of the sky with the star Antares as starting point of the radio transmission and the spectrum of the transmission recorded with a small USB-antenna. The voice (the vowels) with call sign PI9CAM becomes visible in the jagged band, while the EEG transmission becomes visible as a dense continuous band. Meanwhile, the guests hear the transmission.’ 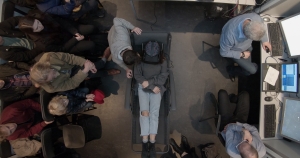 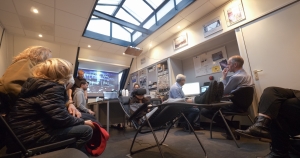 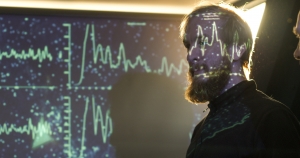 After the two groups alternated for a comparable experience, the art project COGITO ‘in space’ was closed with a lively reception.

What a gorgeous photo of the telescope by @hans.va