The days when you had to observe meteors with large complex radio receivers and antennae seem to be over. The development of inexpensive RTL-SDR dongles makes it possible to make a broadband radio receiver in no time from your laptop with which you can detect radio reflections of meteors.

We give you some practical tips and construction plans for observing meteors with a Software Defined Radio (SDR). This broadband radio receiver is a kind of USB stick that you plug into a computer and connect to an antenna. The result is a simple and low-budget radio setup.

Here we list the most important components for you, with a short explanation.

This is the so-called RTL-SDR dongle with an R820T (2) tuner. These can be ordered at electronics stores for prices ranging from € 25 to € 40 including BNC / MCX converter cable (for example via this electronics store). The aforementioned webshop also offers a Dutch installation description and links to suitable software (including SDR #, Zadig). Via Amazon.com or RTL-SDR.com the dongle with aluminium housing shown below is for sale for $ 21.95, but several (Chinese) sites offer these RTL-SDR dongles for lower prices. This type of dongle is also used for the webSDR of CAMRAS (see below).

To detect meteors via the GRAVES radar, you use the control software to adjust the frequency of the SDR dongle to 143.0485 MHz, which is slightly lower than the frequency of the radar. With the reception mode in upper side band (USB) you can change the carrier of the GRAVES radar in a tone. If there is a reflection on a meteor, the reflection will become audible as ‘ping’. The reflections can then also be visualized with special audio analysis software. 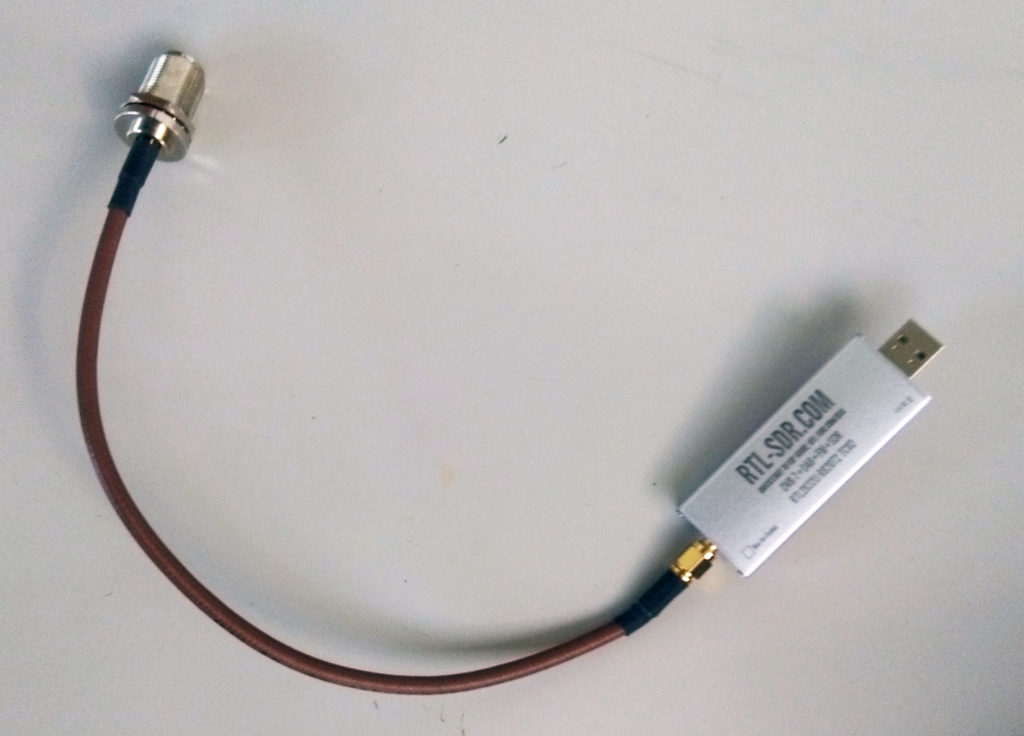 Photo: CAMRAS (Simon Bijlsma) RTL-SDR dongle. Suitable dongles are available through electronics stores as ‘DVBT / DAB stick’. The ‘luxury’ version of the photo is optimized for radio applications and comes in an aluminium housing with SMA connector (gold-colored on the photo), which is provided here with an adapter cable to a conventional ‘N’ antenna connector.

This SpectrumLab software was developed by a radio amateur Wolfgang Büscher (DL4YHF). Scientific institutes such as BISA also use this software. Paul Hyde (G4CSD) of the ‘British Astronomical Association’ (BAA) has written a number of worthwhile articles about the construction of the ‘MetScat’ antenna(see photo below) and the use of the SpectrumLab software with a good explanation of the application for meteor detection. CAMRAS volunteer Frans de Jong (PE1RXJ) gave a talk at the EUCARA 2018 conference explaining how the SpectrumLab software can best be used to visualize and automatically count radio reflections on meteors. Please read his tips and suggestions for visualizing radio meteors elsewhere on this website in the article’ Visualize radio meteors’ and also his EUCARA presentation : First Results with the live CAMRAS Meteor reception

3. A suitable directional antenna, such as a Yagi antenna.

For observing meteors with an SDR dongle, you achieve the best result by using an antenna that has between 3 and 5 elements. Although longer Yagi’s with more elements have more gain so that basically weaker meteors can be heard, at the same time the opening angle of those long Yagi’s is much narrower, so that there are far fewer meteors to be heard. You can purchase from about € 70 to € 80 ready-made 3-elements 144 MHz (2 m-band) antennae. Antennae for the 6m band are more expensive because of the longer element lengths.  Such a Yagi antenna that is optimized for one of the three meteor beacon frequencies is also very easy to make with materials from the local hardware store. View the building instructions to make a directional antenna yourself. Photos: CAMRAS (Simon Bijlsma) Self-build antennae for a radio meteor scatter station. On the left the optimized 143 MHz (DK7ZB) Yagi antenna for which the building instruction is on this website. On the right a brass ‘MetScat’ antenna after the design of G4CQM, as described bij Paul Hyde (BAA). Example of another type of antenna that is also very usable.

The webSDR on the CAMRAS website uses an online receiver that makes it possible for different users to tune independently within a few frequency bands. This receiver is a so called Software Defined Radio (SDR) and gives a good idea of ​​the possibilities of this setup to detect meteors. Here you can find my presentation about the construction of the aforementioned webSDR receiver, from the talk which I gave at the EUCARA 2018 conference: Building the CAMRAS Meteor Scatter webSDR. Until recently for the reception of GRAVES, the earlier described 3-element 2m antenna was used. At the moment you can listen to meteors, by means of a 5-element 143 MHz Yagi antenna that has been built especially for meteor scatter. Also the 6m band uses the earlier described 3 element selfbuild 49 MHz Yagi antenna. In addition to the possibility of listening to meteor reflections via the GRAVES radar, it is therefore also possible to listen to the BRAMS beacon with the webSDR. Aforementioned beacon at Dourbes can be heard via this direct link on http://websdr.camras.nl:8901/   Other beacons such as GRAVES and Ypres can be tuned to at the same site.