For access in the radio telescope we ask € 2 and for youth € 1. It is not possible to pay with pin.
Stargazing outside and listening to the presentations in the Muller House is free for everyone.

Tip: take a flashlight with you, but close to the stargazers use it moderately and preferably covered with red cellophane.

The radio telescope is easily accessible by bike; the car can be parked at the Staatsbosbeheer parking lot; from there it is about 15 minutes walk to the telescope.

The reason for this extra opening is the 100th anniversary of the International Astronomical Union (IAU). To commemorate this, it is celebrated worldwide for a year with all sorts of activities.
The birthday IAU100 starts in January 2019 with a long weekend stargazing: 100 Hours of Astronomy, four days and nights, from 10-13 January 2019, with amateur and professional astronomers, lovers of astronomy and the general public to share their knowledge and enthusiasm for the Universe.

In the Netherlands, 100 Hours of Astronomy is ‘Nederland kijkt sterren van 10-13 januari 2019‘.
In the Netherlands, this long weekend will involve several activities, of which the special opening of the Dwingeloo Radio Telescope on Saturday night, January 12, is one.

– Update: Short impression of the evening

During the demonstrations in the radio telescope observations were done of pulsar (neutron star) PSR B0329 + 54 alternated with observations of hydrogen at the 21 cm hydrogen line in various locations in the Milky Way. While switching the receiving equipment, the telescope operators told astronomical facts, for example about the radio source Cassiopeia A.

Special feature of the radio telescope is that even in rainy and cloudy weather the demonstrations continue as radio waves go straight through the clouds. Therefor, despite the bad weather conditions  outside, our visitors were not disappointed in the radio telescope. In contrast to the few visitors who looked through the optical telescopes to see a watery glimpse of the Moon in a few holes of the cloudy sky. 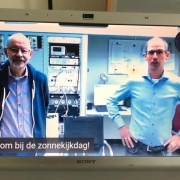 Possibilities of the CAMRAS webSDR
Scroll to top