For the first time ever we entered in an amateur television (ATV) with the Dwingeloo telescope today!

Ham radio operators are also allowed to transmit television. No tv shows of course, but some imagery from the shack or details of the radio equipment. The ATV community in The Netherlands is quite active, certainly compared to that in surrounding countries.

Just like in other amateur radio disciplines, also ATV has contests. The weekend of 12 and 13 September had such a contest. In other ham radio areas, for making a valid contact it is necessary that both parties receive each other, and so also both transmit. For ATV this is different! A one way contact is also valid and yields points in a contest. This specific fact makes it interesting to practice some ATV in the Dwingeloo telescope! To receive other ATV signals, we must point the telescope to the horizon, and transmitting there is not allowed because it is lower than 10 degrees. The latter makes most ‘earthly’ modes impossible for a contact with the Dwingeloo telescope. Except for ATV!

Despite the fact that TV is a quite old technique, the last years the amateur world saw some very interesting developments. For one, nowadays with a RTL SDR-dongle and some software one can make a very sensitive ATV receiver. And also in the amateur world things are becoming more digital, so also more digital ATV (DATV) is done. Which can also be done with a dongle and some free software. In short, ATV has never been easier than now.

This is why we thought it was a good idea to see what’s possible in  ATV reception from Dwingeloo. During a contest there is a lot of activity and people are happy that we can contribute ‘contest points’. So an ATV contest is the ideal moment to do such an experiment. Our plan was announced well in advance in the ATV world, which caused a very nice reaction from the UK: we were given a special DATV receiver!

In the early morning of 13 September Jaap PA0T, Erik PA1ET, Gerard PE1BBI and me PA3FXB got started to install a bunch of laptops and dongles in the telescope. That went smoothly and just after 8 we had the first contact in the log. After that it went on and on! A continuous queue of people who would like to try a contact with us. We could receive on 70 cm, 23 cm and 13 cm, so it was quite challenging to make everyone happy.

The domestic highlight was Rob PE1ITR who took his ATV equipment on board a plane with Hans PE1CKK and helped many people make a very special contact. The international highlights were contacts with the UK on 70 cm in DATV. Unexpectedly strong signals from G8GTZ and M0DTS/p. Great enthusiasm on both sides of the North Sea!

All in all it was a very successful activity with 39 contacts in the log in total! This is very probably not the last ATV activity from Dwingeloo. 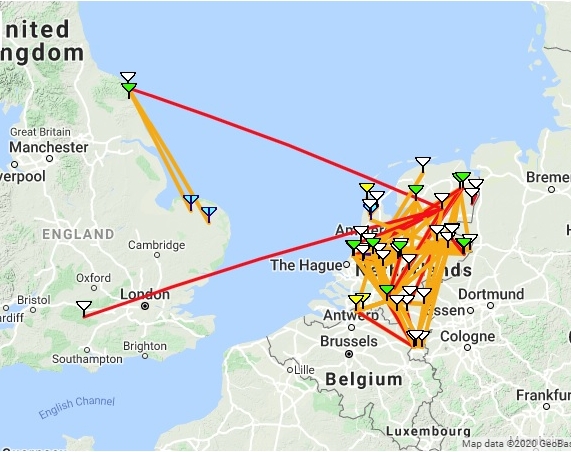