On Saturday morning July 18, 2020, the Moon passed in front of the Crab Nebula (M1 – first object in the Messier catalog) very early. Every 9 years (approximately) there is a series of about 18 coverings (occultations), of which only a few are observable from the Netherlands. This makes such an obscuration relatively rare. Paul Boven and Hans van der Meer observed this covering with the radio telescope. Cees Bassa and Tammo Jan Dijkema were also involved in the preparation. The Crab Nebula is the remnant of a supernova recorded by Chinese astronomers in 1054. To observe it with the eye you need at least binoculars, but at radio wavelengths it is one of the brightest sources in the sky. By measuring the covering with the radio telescope, despite the telescope’s wide beam, they were able to accurately measure the exact size of the area where radio radiation is coming from. In the case of the Crab Nebula, this area appeared to coincide with the area of the visible nebula – which is far from the case for a lot of radio sources!

Paul Boven and Hans van der Meer replicated the historic measurement thinly on Saturday morning. The entire data processing (3 GB of raw data) has yet to be done and will be included in a follow-up blog post, but the first results look very good. We recorded 50 MHz around 21 cm (with enough time resolution to see the pulsar) and 30 MHz at 70 cm, the frequency at which the measurement was also taken in November 1955. The figure above is the preliminary result made by Paul Boven.

For those who also want to carry out the observation: the next series of coverings will start in January 2030. 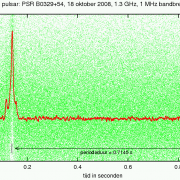