This year marks the 70th anniversary since the 21 cm hydrogen line was first observed. American astronomers from Harvard were the first, six weeks later the Dutch astronomers in Kootwijk also succeeded. And it has been 65 years since the Dwingeloo Radio Telescope was commissioned. The text and images below are an adaption with additions from a previously published blog post (in Dutch) on older versions of the CAMRAS, Volkssterrenwacht Bussloo and wiki.waarnemen.com websites. While astronomers in professional literature and we below often refer to Kootwijk, this actually refers to the neighborhood Radio Kootwijk which is now part of the municipality of Apeldoorn.

The commemorative panel on the Turfberg in Radio Kootwijk

In honor of the groundbreaking radio astronomy research that was carried out in Kootwijk, an information panel Astronomical past of Radio Kootwijk was officially unveiled ten years ago on Wednesday, May 11, 2011 in Radio Kootwijk (then exactly 60 years after the 21 cm hydrogen radio spectral line was observed there). The panel is located on the Turfberg on the spot where the original Würzburg antenna used to be. The unveiling was done by Prof. Dr. Hugo van Woerden (emeritus professor of astronomy at the University of Groningen) and Ari Hin (retired ASTRON technician). Both were involved in processing the observations in Kootwijk and the data-analyzation in the 1950s. 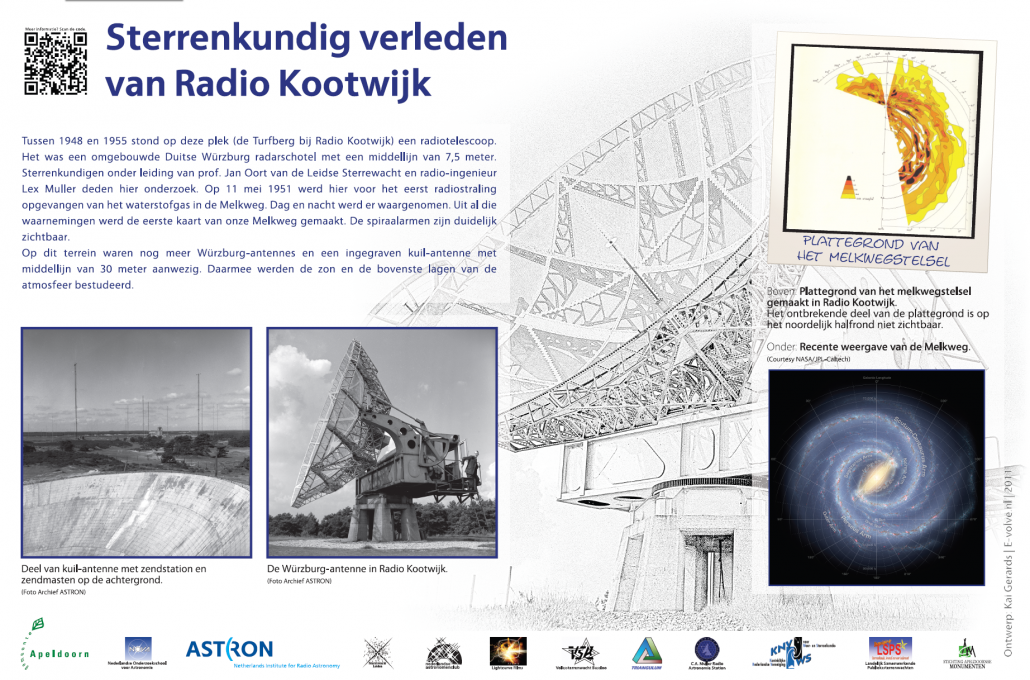 Between 1948 and 1955 there were four German Würzburg radar dishes with a diameter of 7.5 meters on the Turfberg near Kootwijk. During World War II, these dishes were part of the so-called Atlantic Wall – the German radar defense line along the entire European coast. Ir. A.H. de Voogt (head of the PTT radio service) had prevented them from disappearing as scrap metal and placed a number of them near the Radio Station Kootwijk transmitter park for research of the Sun and the ionosphere.

One of the Würzburg antennas was made available by De Voogt for radio astronomy research on the Milky Way. This research was led by Prof. Dr. Jan Hendrik Oort of the Leiden Observatory and radio engineer Ir. Lex Muller of the Netherlands Foundation for Radio Astronomy (NFRA or SRZM; the precursor of ASTRON). The Leiden astronomers wanted to detect radio waves from the Milky Way and map the Milky Way. That would not have been possible if the 21 centimeter radio spectral line of neutral hydrogen had not been discovered a few years earlier. 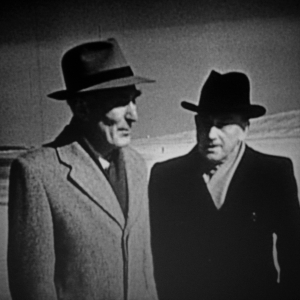 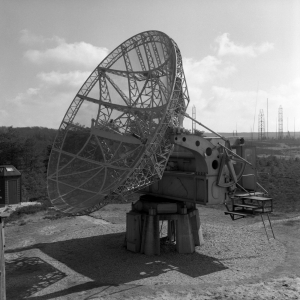 The Würzburg dish on the Turfberg in Kootwijk in the 1950’s. The antennas of the transmitting station are in the background. 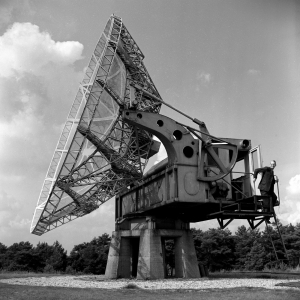 Prompted by Prof. Jan Oort of the Leiden Observatory, the former Utrecht astronomy student Henk van de Hulst had already calculated in 1944 that hydrogen atoms would emit very weak radio waves at a wavelength of 21 centimeters. Prof. Kees de Jager explains this in the first film fragment from Spiral Galaxy, the Milky Way unraveled. Hydrogen is the most common element in the Universe, and it is also very abundant in the Milky Way in the form of enormous ‘hydrogen clouds’. If those radio waves really existed and could be observed, then the movement of the hydrogen clouds and their location in our Milky Way could be determined and mapped as such. Prof. Hugo van Woerden explains this in the second film fragment. (Both fragments are Dutch spoken with English subtitles).

Read in the summary (first image; in English) and the other two images below (in Dutch) what Van de Hulst himself explains about the existence of the 21 cm line in his article Radio waves from outer space in the Nederlandsch Tijdschrift voor Natuurkunde, Jrg. XI, No. 12, December 1945. 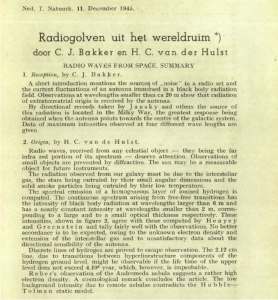 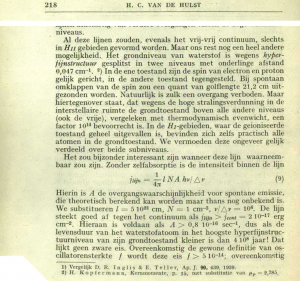 In that period, it turned out to be quite a technical challenge to build radio receivers that were sensitive enough to be able to observe the weak radiation of the spectral line at a wavelength of 21 cm. But on March 25, 1951, the American astronomers Harold Ewen and Edward Purcell of Harvard got the scoop. That spring, Van de Hulst was in Harvard to give lectures on radio astronomy. He was in contact with Ewen and Purcell and informed them about the astronomical background of the hydrogen line and the anticipated broadening of the spectral line (due to the Doppler effect) by differences in velocity of the hydrogen clouds in different parts of the Milky Way. Ewen adjusted his receiver accordingly. Van de Hulst informed Muller about the frequency switching technique Ewen used to keep the radio receiver as stable as possible in order to be able to detect the weak signal. Ewen switched the receiver frequency between ‘on’ and ‘next to’ the frequency of the spectral line. With this knowledge, Muller and his team also succeeded six weeks after the Americans on 11 May 1951, to receive these radio waves from the Milky Way. Read here a transcript of a conversation that Ewen and Purcell had about this in 1987.

The first maps of the Milky Way

Unlike the American astronomers, the Dutch researchers and radio engineers in Radio Kootwijk continued to observe the 21 cm hydrogen radiation. After the first detection in May 1951, Muller realized that a new more sensitive receiver would be needed that would be even less affected by the transmitters of the Kootwijk Radio transmitting station. After a year of work, it was put into use in 1952 and a systematic observation campaign was started to map the entire Milky Way, at least as far as it is visible from the Netherlands. Leiden students, supported by technicians from the SRZM, literally worked day and night for many months. 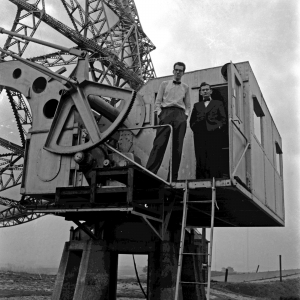 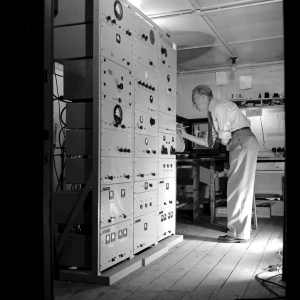 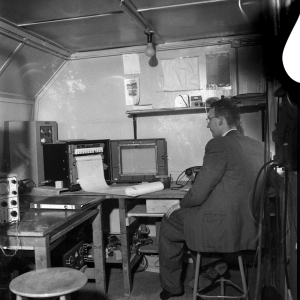 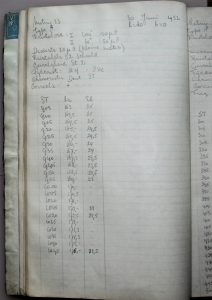 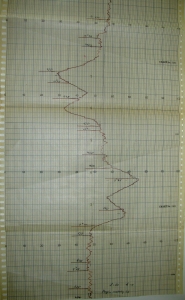 In the spring of 1953, Van de Hulst, now an astronomer at the Leiden Observatory, was invited to give the Halley Lecture at the University of Oxford about the work on the Milky Way. For this, he wanted to show a first version of a map, based on the observations that had been made so far. The map was made in no time, thanks to a crash action by Oort and with the help of all students and arithmeticians at the Leiden Observatory. On this map, the first spiral arms were clearly visible. The Sun is located at the edge of a spiral-armed Galaxy about 100,000 light years across. It was a triumph, a large step forward in our thinking about our place in the Universe. The full text of the speech The Galaxy explored by radio waves is available in The Observatory, Vol. 73, P.129-139, 1953 (the missing page 138 is here). 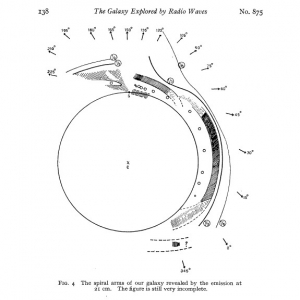 First map of the Galaxy presented by Van de Hulst at the Halley Lecture (1953). 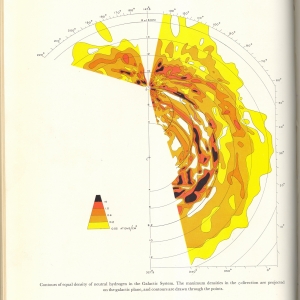 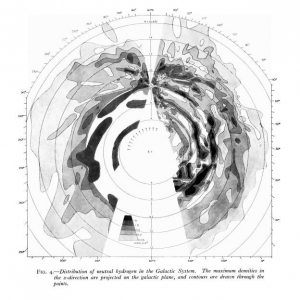 After the first observation campaign, a second more extensive campaign was conducted between 1953 and 1955. Those observations enabled the astronomers to construct a three-dimensional map. This map shows the structure of the Galaxy much better. This map was published by Gart Westerhout in the article The distribution of atomic hydrogen in the outer parts of the Galactic System in the Bulletin of the Astronomical Institutes of the Netherlands, Vol. 13 (No. 475), p.201-246, 1957.

Collaboration was also sought with radio astronomer Frank Kerr and his team in Australia, because from Australia that part of the Milky Way that does not rise above the horizon in the Netherlands can be observed. By combining the Australian observations with the Dutch observations, a complete map could then be made as published by Oort, Kerr and Westerhout in the article The Galactic System as a Spiral Nebula in the Monthly Notices of the Royal Astronomical Society, Vol. 118, p.379-389, 1958. 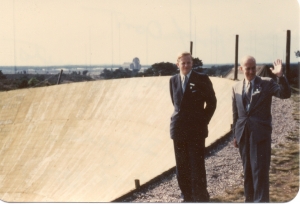 Van de Hulst (l) and Oort (r) at the 30 meter diameter pit antenna of the PTT in Kootwijk.

The activities and results achieved in Kootwijk and at the Leiden Observatory formed the concrete start of a long tradition of distinguished radio astronomy research in the Netherlands. A tradition that continues to this day.

With the opening by the former Queen Juliana on April 17, 1956, the large radio telescope in Dwingeloo (Drenthe) became available. A dish with a diameter of 25 meters and at that time the largest fully steerable radio dish in the world. This was Oort’s dream fulfilled. All radio astronomy activities moved from Kootwijk to Dwingeloo.

In the 1970s the Westerbork Synthesis Radio Telescope became available, 14 dishes of 25 meters arranged in an east-west line in Westerbork, not far from Dwingeloo. Together, these dishes can simulate a radio telescope with a diameter of 3 km! And in the 2010s LOFAR (Low-Frequency Array) came into operation.

Astrid Elbers’ 2015 dissertation Early Dutch radio astronomy (1940-1970) : the people and the politics provides a thorough analysis of how Dutch radio astronomers arrived at these results. And in his article How was atomic HI (λ = 21 cm line) in space discovered? from 2013, the astronomer Richard Strom answers his question.

Journalism about the Dutch radio astronomy

About the commemorative panel 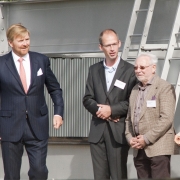 Solargraph of the telescope