The Artemis I rocket with the Orion module was launched on Wednesday, November 16, at 07:47 CET. Alongside 17 other participants, CAMRAS has been selected by NASA to follow the 25-day lunar mission with the 25-meter Dwingeloo Radio Telescope. The purpose is to receive the signal from the Orion module and to measure the frequency of the radio waves emitted by the module.

Until December 11, the telescope will be directed to the Orion module as much as possible to collect data for NASA. So far, the telescope has been in operation for eleven consecutive days. This is unique for the restored Dwingeloo Telescope; since the founding of CAMRAS in 2007, the telescope has not been in continuous operation for such a long period. The technical organization of the Orion observations is in the hands of volunteers Cees Bassa, Tammo Jan Dijkema, Hans van der Meer and Thomas Telkamp. However, the implementation has so far already called for the active involvement of about twenty CAMRAS volunteers as telescope operators.

On November 16, the launch  was delayed for 45 minutes, which resulted in the current JPL Horizons System orbit data not being correct, and the radio telescope not being properly positioned on the location in the sky where the rocket should have been during the first few hours after launch. At the observing frequency of 2,216.5 MHz (13.5 cm wavelength), the radio telescope’s beam is about 0.35 degrees, so there is little free space in the sky to catch Orion’s signal. On the day of launch, this posed a bit of a problem until Cees had calculated the temporary TLE orbit data.

We compare the measured frequency with the frequency of 2,216.5 MHz transmitted by the Orion module. The difference between those two frequencies is the so-called Doppler shift due to the module’s velocity relative to the radio telescope. Using the orbit data of the module provided by NASA and the position of the Dwingeloo Radio Telescope on Earth, we know the magnitude of the Doppler shift and can check whether it is correct or deviates. We send the carrier wave frequencies measured by the radio telescope and the time they were measured by us to NASA – in addition, they are accessible to everyone.

A nice result was the observation on November 21, when the Orion module disappeared behind the Moon for the first time. The radio signal disappeared abruptly and reappeared just as abruptly as the module emerged from behind the Moon.  Seen from Dwingeloo, this happened a little earlier than from the USA, where NASA dedicated a livestream to this event. 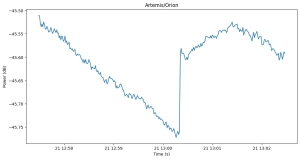 The observed radio power when the Orion module appeared from behind the Moon.

In addition to tracking the Orion module, CAMRAS is also involved in observing two experimental cubesats (see Omotenashi and Team Miles below) ejected by the rocket for other experiments. And more info on the observation method later in this blog post.

The lunar mission and the radio telescope in the media

Regarding the launch, there was quite a bit of press interest in and around the radio telescope. We were on TV with SBS 6, NOS regional, RTV Drenthe, on radio with NPO 2, and in the newspaper Volkskrant. See here the URL’s of these Dutch media items.

Contribution to the mission of the Japanese cubesat Omotenashi

Problems arose during the disembarkment of the Japanese Omotenashi cubesat from the rocket. After several maneuvers, the batteries were dead and the solar panels were not facing the Sun. JAXA was unable to establish communication with the cubesat and determined that the operation for the planned lunar landing could not be carried out (see press release). The Dwingeloo Radio Telescope will no longer contribute to observing the Omotenashi unless JAXA manages to reanimate the cubesat. They will attempt to do so in March 2023. A moon landing is no longer there for Omotenashi.

Contribution to the mission of the cubesat Team Miles

The Team Miles is another cubesat that went along with the Artemis I lunar mission. This Team Miles consists of a fully autonomous mission to test new plasma thrusters and an SDR transmitter. The cubesat will be placed in orbit around the Sun and the intention is to test communications up to 400 million kilometers. 400 million kilometers roughly corresponds to the greatest distance between Earth and Mars. This cubesat also experienced communication problems; the Dwingeloo Radio Telescope made several attempts to detect its signals, but so far without success.

The used back-end receiver system with a bandwidth of 10 MHz consists of an Ettus USRP B210 SDR and for the clock signal the hydrogen maser, synchronized via a White Rabbit Switch, from the Westerbork Radio Synthesis Telescope is used. The observations are visualized with GQRX. The frequency shown on the screen is incorrect, but of course we record the correct observation frequencies on disk – accurate down to the Hertz!

SDR Radio Waterfall with a strong signal on 2.2165 GHz 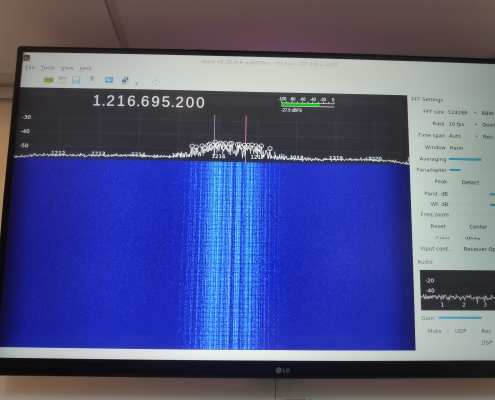 Examples of these signals converted to sound are (top) the carrier tone, and (bottom) a more noisy data block:

To give an impression of the Doppler shift during the observations, we have sped up a 24-minute observation of the carrier tone 120 times. So below, the playback time has been reduced to 12 seconds.

The results are available on the public CAMRAS Artemis data.