Blog - Latest News
You are here: Home1 / Amateur radio2 / Our precious Earth and the lunar far side 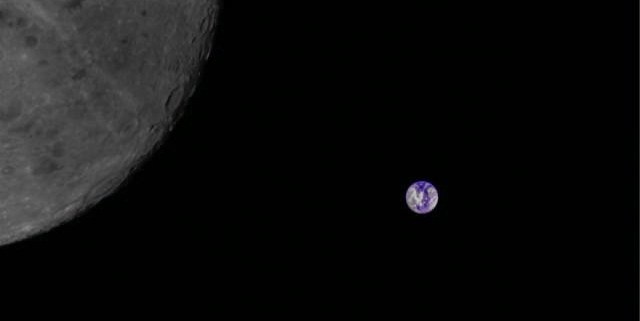 Far side of the Moon photographed by amateurs

This image shows the far side of the Moon, as well as our own planet Earth. It was taken with a camera linked to an amateur radio transceiver on board the Chinese DSLWP-B / Longjiang-2 satellite (call sign BJ1SN), currently in orbit around the Moon, and transmitted back to Earth where it was received with the Dwingeloo Telescope.

This image represents the culmination of several observing sessions spread over the past few months where we used the Dwingeloo telescope in collaboration with the Chinese team from Harbin University of Technology, who build the radio transceiver on board Longjiang-2, and radio amateurs spread across the globe.

During these sessions we tested receiving telemetry through low-bit rate and error-resistant digitally modulated transmissions, as well as the JT4G modulation
scheme designed by radio amateur and Nobel prize winning astrophysicist Joe Taylor (K1JT) for weak signal Moon bounce experiments. Besides telemetry, we performed a VLBI experiment by simultaneously observing Longjiang-2 from China and Dwingeloo, and also downloaded images taken by Longjiang-2 of the lunar surface, lens flares, and the starry sky as seen from lunar orbit.

The transceiver on board Longjiang-2 was designed to allow radio amateurs to downlink telemetry and relay messages through a satellite in lunar orbit, as well as command it to take and downlink images. In that it has succeeded, as many radio amateurs have received telemetry and image data. Being able to use the Dwingeloo telescope to help with this has been a lot of fun.

This full color adjusted image is received by radio amateurs, including the radio amateurs of the Dwingeloo Radio Telescope (PI9CAM) operated by Tammo Jan Dijkema and myself. Commands were created by MingChuan Wei (BG2BHC) and uplinked by Reinhard Kuehn (DK5LA). The color correction of the image is done by Wei. 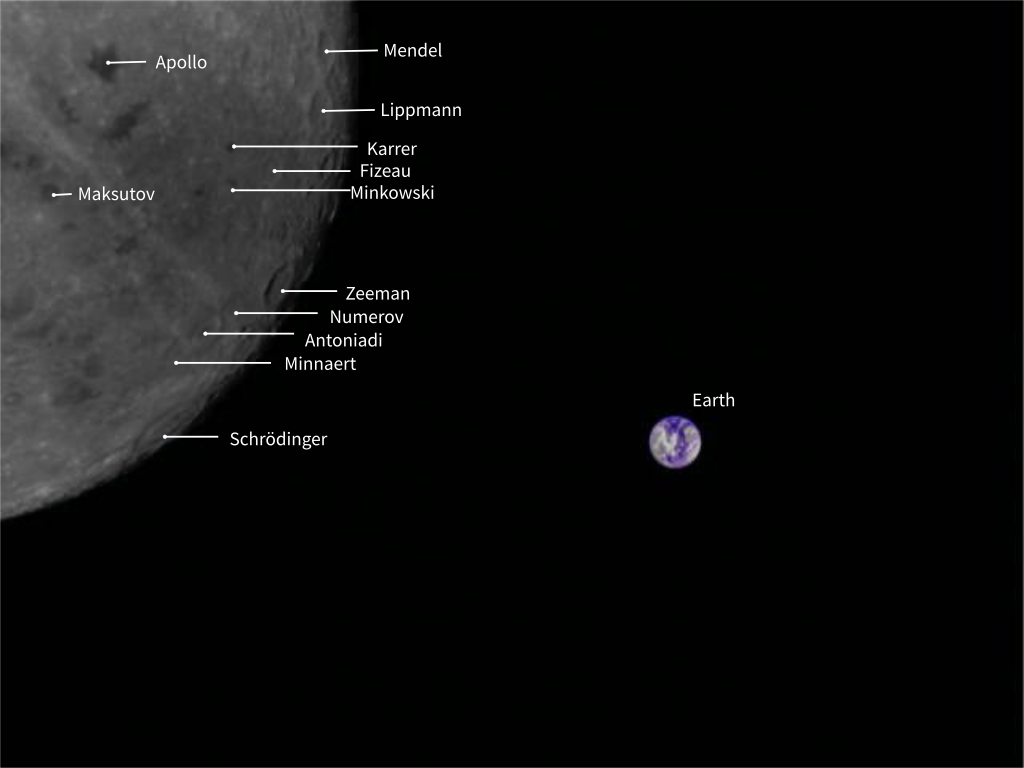 The annotated picture with names of Moon craters is made by Tammo Jan. Note that the crater Minnaert is named after the Dutch astronomer Marcel Minnaert. Minnaert was member of the SRZM board in the time the Dwingeloo Radio Telescope was designed and build.

Below are two other images, also slightly color corrected. The original images are here. The third image shows the Moon clearly seen from Dwingeloo Radio Telescope through the window of the observation room and the metal mesh of the mirror. 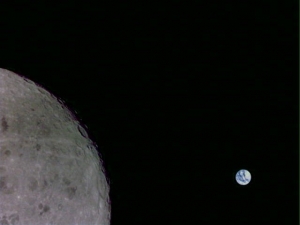 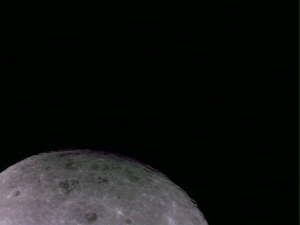 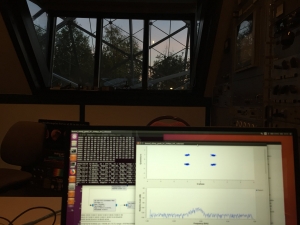 The animation below shows the Moon as seen from the DSLWP-B satellite as it orbits around the Moon. The animation pictures were taken on October 15. Data for the animation was collected by Cees Bassa and Tammo Jan Dijkema in the Dwingeloo Telescope (PI9CAM), by Imants Tukleris (YL3CT), Mike Rupprecht (DK3WN), and Dimitry Borzenko (4Z5CP). The satellite was commanded by Reinhard Kuehn (DK5LA).

About this experiment, Cees Bassa and Tammo Jan Dijkema wrote a slightly more detailed blog Imaging the Earth from Lunar orbit in The Planetary Society.

A more recent animation is on our newer blog Time-lapse of the Earth appearing behind the Moon.

After a radio-quiet period to avoid interfering with the Chang’e 4 Lunar landing, DSLWP-B became active again on 13 January 2019. The first opportunity to take photos of Earth and Moon were on 3 February, on which a command was sent to take another timelapse. The first image from this timelapse was downloaded with the Dwingeloo telescope on February 4, 2019. For the first time, it the entire Moon and Earth are in view. The results of this Chinese lunar satellite have now been published in Nature Communications. Tammo Jan Dijkema and Cees Bassa were involved in this publication. They are included in the publication as affiliated with “C.A. Muller Radio Astronomy Station “and” ASTRON “. See https://www.nature.com/articles/s41467-020-17272-8 (‘open access’). A short text about the beautiful moon photos was published before in Science, but this is a full publication. Of course the Dwingeloo Radio Telescope is  mentioned in the article.

In advance in December 2017

December 2017, in preparation for the mission and discussion of the possibilities of the antennas and receivers in the radio telescope, Hu Chaoran (BG2CRY) and MingChuan Wei (BG2BHC) both of the Harbin Institute of Technology visited Harry Keizer (PE1CHQ) and Jan van Muijlwijk (PA3FXB) of CAMRAS. On the photo in front of the Dwingeloo Radio Telescope to the left Jan, in the middle Chaoran, and to the right Wei. In fact the Dwingeloo dish is transparent metal mesh, but on this winter photo covered with snow. 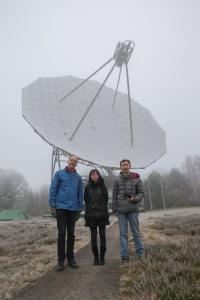 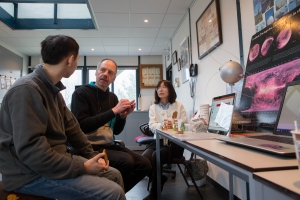