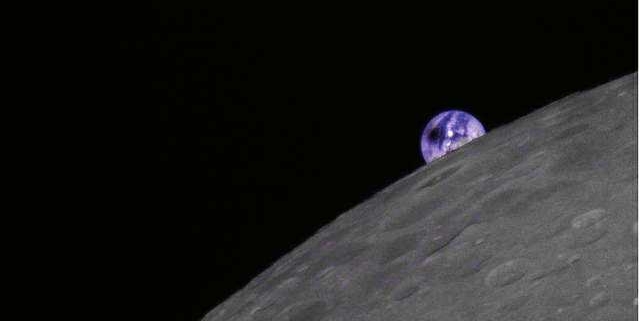 Last Wednesday morning, July 3, the Dwingeloo Radio Telescope downloaded this eclipse photo from the Chinese lunar satellite DSLWP-B. The photo was taken on Tuesday evening, July 2, 2019, when a full solar eclipse was seen in South America. That is where the shadow of the Moon fell on Earth. That shadow is clearly visible in the photo.

The ISS and weather satellites have previously taken pictures of the shadow of the Moon on Earth, but this picture is – as far as we can ascertain – the first ever photograph of a solar eclipse taken from an orbit around the Moon. And the Dwingeloo Radio Telescope cooperated!

This year and last year many CAMRAS volunteers contributed to the collaboration in this special satellite webcam project from MingChuan Wei (BG2BHC/BY2HIT) of the Harbin Institute of Technology. A project that will end in the course of this month as the DSLWP-B satellite will crash onto the Moon in a controlled manner.

More info about this project in our blog posts Our precious Earth and the lunar far side, Time-laps of the Earth appearing behind the Moon and New photo of Lunar farside and Earth. Also, see our guest blog on The Planetary Society.